In the first of a three-part series, we go inside Canberra homes spanning the best part of a century.

Creating a family home is, for any architect, a labour of both love and professional pride. But for Steven Cetrtek, there was an added layer of complexity as he restored and remade an original Ken Oliphant-designed home—adding a modern wing to a classic and significant piece of the city’s heritage.

Oliphant (1896-1975) was a prodigious and influential architect conscripted from Melbourne in Canberra’s infancy. He also designed Calthorpe’s House on Mugga Way and some of the southside’s most distinctive abodes. By 1953, Oliphant had set his sights on creating a modest but light-filled family home on Captain Cook Crescent, and it was kept in meticulous condition until it was put on the market in 2016.

Enter childhood sweethearts Steven and Lisa. Having recently sold their renovated Narrabundah duplex, they were literally itching to make over a substantial home to create a family oasis in which to raise Allessandra, 7, and Olivia, 4.

Of course, design principles have evolved somewhat since the ’50s. Steven recalls that while the house was in great condition, it contained some “unusual design features”. By that he means the bathroom was right opposite the front door, there was a clunky mission brown pergola, original ‘50s laundry, kitchen and bathrooms and the rather awkward bedroom extension done in the ‘60s.

But then there were the features that made it all worth it—high ceilings, generous rooms, a fireplace, wide hallways and that subtle ‘Mad Men’ vibe. Most of all there were the windows—original steel-framed corner windows—which both Steven and Lisa fell completely in love with and which have subsequently informed other design elements in the home.

The couple secured the property after a few nervous days of negotiation and set about transforming it as owner-builders and project managers. Creating the Instagram account @salohouse to chronicle the renovation journey along the way, the project took around nine months—including three months of bone-shaking, dust-creating internal demolition of double-brick and load-bearing walls. Not for the faint-hearted.

While Steven was ready to put his next generation architect’s stamp on the home, he also shared the process with Lisa, whose eye for interior design has provided some of the home’s most beautiful atmospheres. The existing layout of the front rooms and entry was kept as original as possible to maintain the house’s street character. But beyond those rooms a huge transformation took place. All bedrooms were moved to the rear to take advantage of the private and verdant backyard and to minimise street noise.

Working to emphasise the beauty of the original windows, Steven’s design response was to complement them with similar grey-boxed frames in the living room and children’s  bedrooms for relaxing and reading.

Lisa loves it when the family congregates to eat outdoors under a huge covered terrace that includes a neat outdoor kitchen directly connected with the main kitchen. Together, they oversaw the selection of the home’s palette of white, greys and oak. The herringbone floor is carried through in a marble herringbone tile in bathrooms, while v-groove panelling is used in the kitchen joinery, on all the internal doors and dark grey externals. 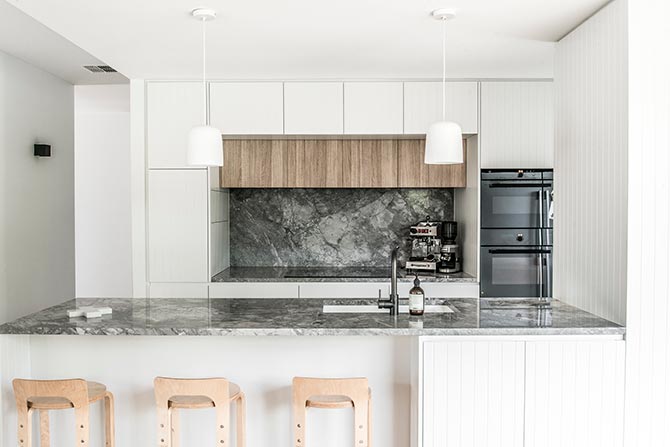 Steven came up with the garden design which is enhanced by the massive elm tree, around which a deck is built, with a fish pond to one side.

The girls swing on their British Oak and Rope Company swing (Prince William has one too) while light filters through enormous rattan light fittings Lisa insisted on.

She said investing in high quality window treatments custom-made by Chadwick Designs was a wise decision. Deciding on a paint colour for the front room, however, was far less straight-forward. Armada by Dulux was the winning shade—neither too green, nor too blue—after six hair-pulling attempts.

It’s Steven’s favourite room and takes on a cozy feel in winter when the fire goes on and the drinks trolley comes to the fore. There is no television in this room, just artworks and the vista of the street to focus on—just as the couple want it.

Meanwhile, Lisa says she still pinches herself when she wakes in the morning and looks out onto the backyard. There are still a few things left to tick off, including doubling the garage, and adding a sauna—which Steven says is a necessary luxury given the city’s long winters.

For Lisa, there is the thrill of adding layers of art and signature furniture pieces.

“It will probably never feel completely finished, and that’s the beauty of it,” she says.

For Steven, the compromises he had to make working within existing parameters of an old home were worth it. He is delighted with the finished result, which takes cues from the old and transforms a modern addition into a beautiful and eye-catching homage to one of Canberra’s architectural forefathers.

This article originally appeared in Magazine: Home for Autumn 2018, available for free while stocks last. Find out more about Magazine and where to grab your free copy.

Confessions of a Cosmetics Shopaholic

I have been on a bit of a buying spree lately. I won’t lie, I’m…

A disclaimer: I am not impartial to the success of this business. In fact, I…